The Future of Internet Freedom: Policy, Technology, and Emerging Threats 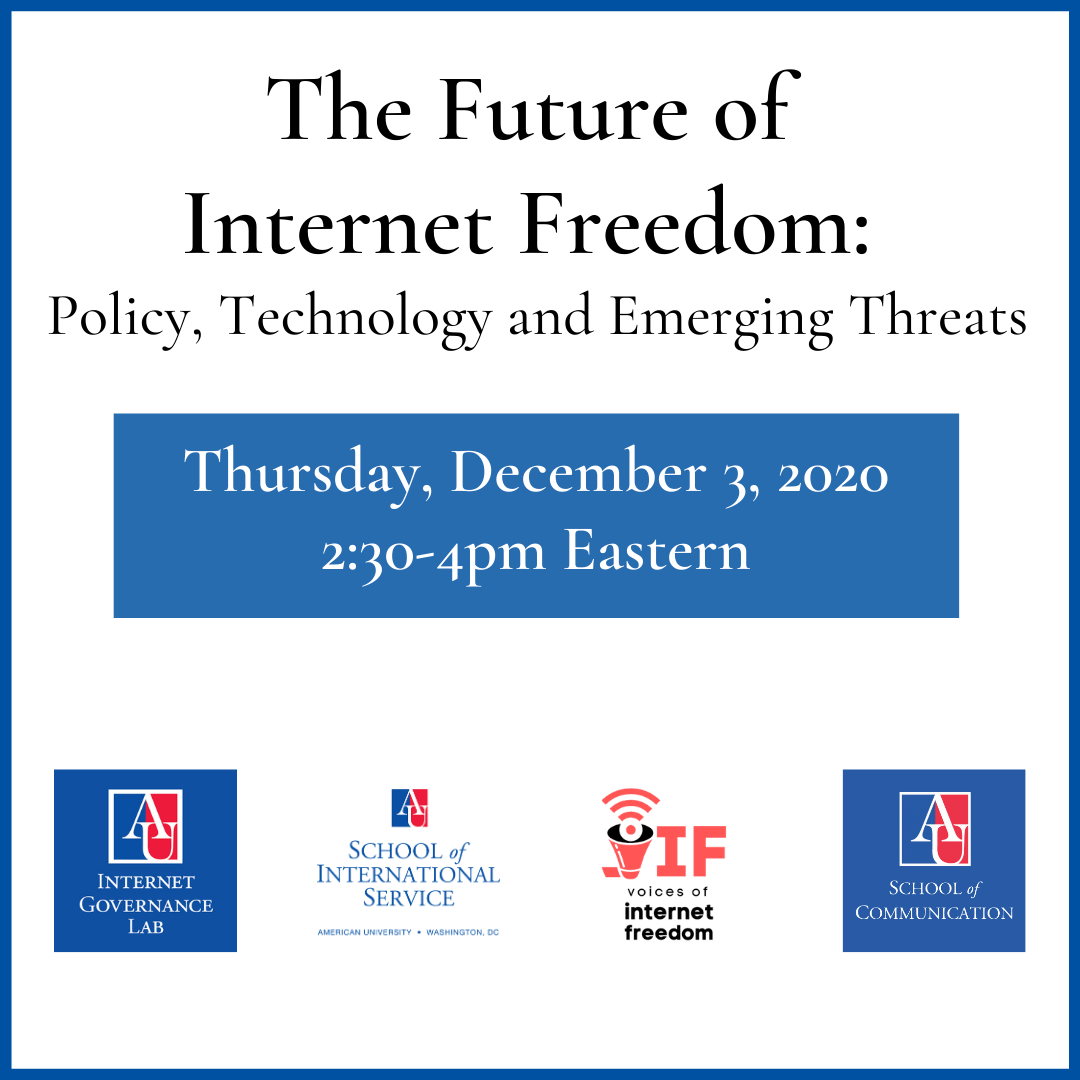 Internet Freedom has become one of the most pressing human rights issues of the day, but controversies continue to swirl around its future – including questions about what lies ahead in terms of policies, funding, and technologies. Join this event to explore the powerful stories of those affected by online censorship in countries around the world. Participate in a thought-provoking dialogue about the outlook for policies and technologies, as well as emerging threats, and how these will impact efforts to open the Internet in every corner of the globe.

Tim Receveur, US Institute of Peace

Moderated by Eric Novotny and Aram Sinnreich, The American University

Agenda for the event:

MAZIAR BAHARI—Award-winning journalist and filmmaker, he was a reporter for Newsweek from 1998 to 2011. He has produced a number of documentaries and news reports for broadcasters around the world including, BBC, Channel4, HBO, Discovery, Canal+ and NHK. Bahari’s films include Rosewater, an adaption of his family memoir, Then They Came for Me. He also heads Journalism for Change and the popular IranWire online news and information service.

DR. ERIC NOVOTNY—Former Senior Adviser for Digital Media and Cyber Security at the US Department of State, presently Hurst Professorial Lecturer and Director of three graduate programs at The School of International Service, American University. He is also the founder of the SIS cybersecurity policy program. He teaches courses in cybersecurity methods and cyber threats. He is also the Chairman of the Board of Directors of the Center for Digital Resilience.

XIAO QIANG—Research Scientist at the School of Information and the Founder and Editor-in-Chief of China Digital Times, a bilingual China news website. He is a leader in promoting the cause of civil and political liberties in China and is a recipient of a MacArthur Fou8ndation fellowship. Xiao’s current research focuses on state censorship, propaganda and disinformation, as well as emerging AI-driven mass surveillance and social control in China. He teaches classes on Digital Activism and runs the Counter-Power Lab, an interdisciplinary faculty-student group researching innovative technologies to expand the free flow of information in cyberspace. Xiao was placed on Foreign Policy magazine’s Pacific Power Index, “for taking on China’s Great Firewall of censorship.”

TIM RECEVEUR—Director of Programs at PeaceTech Lab, the US Institute of Peace. Formerly a Foreign Affairs Officer at the U.S. Department of State where he was nominated for the prestigious Service to America Medal in 2013 and received the U.S. Department of State’s highest award for innovation from Secretary Hillary Clinton in November 2009. A social media wiz, Tim has been featured in numerous publications including the Harvard Business Review and is known for expanding the U.S. Embassy in Pakistan’s Facebook presence from 29,000 to become the largest social network of any diplomatic mission in the world, with over one million followers.

DR. ARAM SINNREICH—Professor and Chair of the Communication Studies Division at American University’s School of Communication. He was also Director of the Media Innovation Laboratory at the OMD Ignition Factory and held positions at Jupiter Research and Radar Research. He is the author of several books on the intersection of culture, law and technology. He has also written for the New York Times and Wired magazine. Also a bassist and composer, he was a finalist in the John Lennon Songwriting Contest and has played with numerous progressive soul groups.

FRANAK VIAČORKA— Vice President of the Digital Communication Network and Digital Strategist for U.S. Agency for Global Media (Contractor), award-winning filmmaker and journalist from Belarus. Franak is an award-winning digital activist and has served as a consultant for the U.S. Department of Defense, Freedom House, and the Broadcasting Board of Governors. He also coordinated the project on mapping digital influencers and is a frequent speaker and an advocate for democracy and personal freedom. He is a graduate of American University.