Blasphemy Laws and the Violation of International Religious Freedom 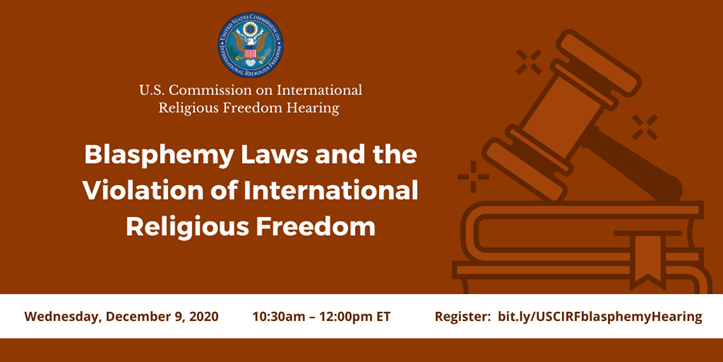 Please join the U.S. Commission on International Religious Freedom (USCIRF) for a virtual hearing about new findings from USCIRF’s upcoming report on the enforcement of global blasphemy laws and the multiple ways they mobilize violence against religious communities.

Blasphemy laws often criminalizes any form of expression that allegedly insults or offends religious doctrines, making it essentially illegal to express religious views different from the majority, including the right not to believe. They are often misused to target faith communities. For example, in Indonesia, where Ahmadi Muslims and Chinese Indonesians are targeted for allegedly committing blasphemy, enforcement is used as a political tool along religious and ethnic lines.

The enforcement of blasphemy laws often sparks incidents or threats of mob violence. In 2019, the government of Mauritania’s inability to protect its citizens from the threat of mob violence was used as justification to continue detaining blogger, Mohamed Cheikh Ould Mkhaitir, who was accused of blasphemy. In Pakistan, vigilantes violently target not only the alleged blasphemer, but also attack lawyers, family members, and the surrounding faith community. The public statements of support for Asia Bibi resulted in the two high-profile murders of Shahbaz Bhatti, a cabinet member, and Salman Taseer, then Governor of Punjab.

Witnesses will provide an overview of blasphemy laws around the world, along with the trends in their enforcement, and present policy recommendations to the U.S. government.

This hearing is open to Members of Congress, congressional staff, the public, and the media. Members of the media should register online and can email media@uscirf.gov for any questions or to schedule an interview. The video recording of the hearing will be posted on the Commission website. For any additional questions, please contact Nina Ullom at Nullom@uscirf.gov or (202) 322-0232.